Nic Roldan is the captain of the American polo team and he looks like this. He also loves mongrels and does a lot of charity work. Sophia Money-Coutts interviews him – with and without his trousers on.

On the way to my interview with Nic Roldan, captain of America’s polo team, I decide to play it cool. I will ask challenging questions. I will not giggle. I will not flick my hair at him. I will be insouciant.
And then I arrive at Cowdray House and go into a bedroom where Nic is trying on clothes. He doesn’t have any trousers on. He is standing there in a pair of bright-orange briefs. The clingy jersey sort.

‘Hey, what’s up?’ he drawls, shaking my hand, still in his briefs. My body convulses with pheromones.

If you are a polo player with an eight-goal handicap, the captain of the American team and blessed with the sort of face that launched a thousand Jilly Cooper books, you could, frankly, get away with being a bit of a dick, swaggering around in a pair of white jodhpurs as women wilt like flowers around you. But Nic – handsome, blue-eyed, 34-year-old Nic – isn’t a tosser. Instead, over the course of the day – photoshoot in the morning, lunch in a local West Sussex pub in the afternoon – he reveals himself to be charming, patient, funny, generous and obsessed with his charity work. And I’m not just saying this because I saw him in his pants. 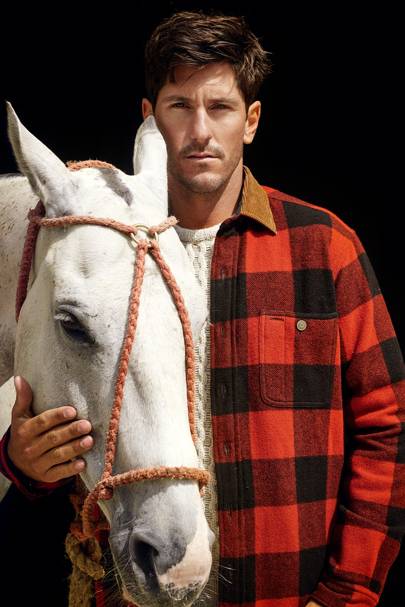 He had just that morning arrived in Britain after spending five months at home in Florida, where he lives from January until May during the American polo season. ‘Poor you – are you jetlagged?’ I ask. This is the first of my challenging questions.

‘Nah,’ he says, ‘I broke the journey with a few days in Holland with my girlfriend.’

Trousers on, we drive to a yard nearby where 11 of his ponies are stabled. He’ll be here for two months, playing for La Indiana, a team owned by American property tycoon Michael Bickford. Nic squats to tickle an English bull terrier called Petuina that belongs to his groom, Terri.
‘Are you a dog or a cat person, Nic?’ I ask. The tough questions just keep on coming.

Terri leads out one of Nic’s ponies, a grey called Ghio, to pose for a photo with him. And then he starts talking in Spanish to it, stroking its nose, nuzzling it with his lovely face.

Nic is the fourth-generation polo player in his family. Born in Buenos Aires to an Argentine father and a German mother, he grew up in Wellington, Florida, the capital of American polo, and remembers sitting on a polo pony at the age of three. His father played in a team for the Sultan of Brunei; his mother is an interior designer. Nic was ‘useless’ in the classroom at school, but excelled outside, at hockey, American football, swimming, golf and polo. He was playing professionally by the age of 14, was on the team that won the US Polo Championship at 15 and then decided to leave school to play polo full time.
Twenty years on, he calls himself a ‘travelling gypsy’, as he tours the world playing in different tournaments. Five months in Florida, two months in Sussex, one month in Spain, one month in Argentina, odd weeks playing in countries including the UAE, South Africa and Australia. This summer, he’s playing for La Indiana in various British tournaments, including the Jaeger-LeCoultre Gold Cup at Cowdray and the Cartier Queen’s Cup at Guards, as well as the odd charity match alongside the Duke of Cambridge and Prince Harry. He’s pals with both, describing them as ‘amazing’ and saying he’s ‘in awe’ of all the work they do.

Because Nic isn’t just gorgeous and charismatic and enthusiastic about British food (he orders a fish-finger sandwich once we’re sitting in the pub and then delivers a monologue on the wonder of the baked potato), he’s also big on philanthropy. He’s an ambassador for both the Kids Cancer Foundation and Brooke USA, the world’s biggest equine-welfare charity, and has hosted a series of international balls to raise hundreds of thousands of dollars for them. The inaugural British ‘Sunset Polo’ ball, which he organised with the help of the Marchioness of Milford Haven, took place in June at Cowdray – a match during the day, a party in a marquee on the lawns at night.

‘Do you ever take a holiday?’ I ask, looking around the pub and wondering if anyone here (apart from me) thinks we’re on a date.

‘My whole life is a holiday, to be fair,’ he says, laughing. ‘But my girlfriend and I are going to Italy this summer, which is cool. I’ve never been.’
OK. All right. The elephant in the room. His girlfriend. She is Jessica Springsteen, Bruce’s 25-year-old daughter. She’s all tanned limbs and long, beachy hair and a champion showjumping rider, so also obsessed with horses. They’ve been dating ‘on and off’ for two and a half years, says Nic. And it’s hard sometimes, given they’re often on separate continents, but they make it work. Their glossy Instagram accounts show them riding and hanging out on Palm Beach together.

I drag out our lunch as long as possible with more challenging questions. ‘Can you cook, Nic?’ I ask. He can cook salmon fillet. ‘American or English girls?’ ‘Both.’ What is your worst habit? ‘Bad table manners.’ He did vote for Trump, because he thinks Hillary Clinton would have been worse still, but even that doesn’t put me off. Then he hugs me (with his trousers on) and gives me a baseball hat monogrammed with ‘NR’ in bright pink. I drive the whole way home in it, cheeks burning from sitting across the table from him. It’s quite hard, being this insouciant.